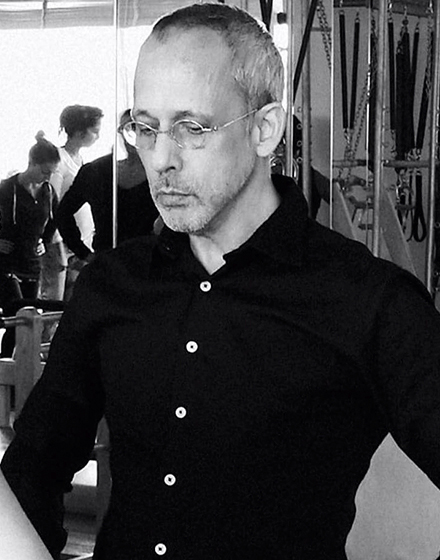 Javier Pérez Pont worked as a professional dancer for over fifteen years, both as a soloist and principal dancer, in several European dance companies.

In 1994, he discovered the Pilates Method and, after two years, was inspired to become an instructor himself, studying with legendary instructor trainers Romana Kryzanowska and Sari MejíaSanto. After earning his certification, he opted to spend two more years working alongside his teachers in order to deepen his knowledge, eventually rising to Level II in the international organization as a teacher-trainer.

In late 1999, he and his partner Esperanza Aparicio Romero returned to Spain, choosingBarcelona as the location for their first studio, with the endorsement and support of their twomentors. In 2002, they started the Instructor Certification Program in Spain. Currently, he continues to collaborate with Romana’s Pilates by teaching at international seminars and workshops. In 2005, Esperanza Aparicio and Javier Pérez Pont published the first book by Spanish authors on the Pilates Method, with the title The Authentic Pilates Method, The Art of Control.

Today Javier Pérez continues to travel the world doing outreach for Contrology in its original form and speaking on the biography of the master.